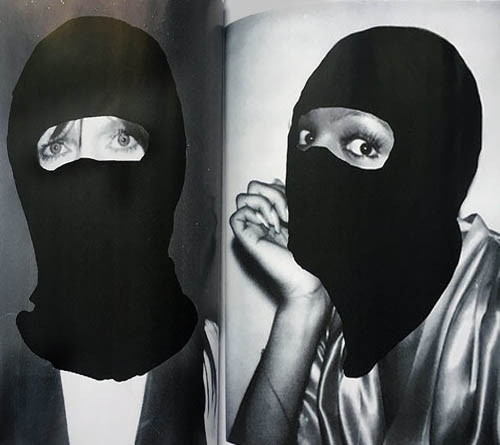 Drag queens, lady celebrities and hangers-on from Andy Warhol’s New York are re-imagined as an anonymous femme militia in these altered photographs printed on silk georgette.

Working from a collection of Warhol’s polaroids taken between the 1950s and 1980s, these images reference the sartorial choices of Antifa activists and Zapatistas, meant to obscure identity, while inadvertently suggesting the modest garments of conservative Muslim women, which are meant to obscure form.

Each reference is at odds in its own way with the pop culture that Warhol helped shape, leaving viewers at the intersection of leftist activism, religious conservatism and the one-time glitterati, an intersection with a strange politics of its own.

Lydia Moyer is a visual artist and media maker who lives and works in Charlottesville, Virginia. She is the director of new media in the studio art program at the University of Virginia.

Click here to rent the Chris White Gallery for your event.

Click here to propose an art exhibit at the Chris White Gallery.